The Coyote Squadron- Commemorating The 75th Commemoration of the End of WWII-“Salute Their Service, Honor Their Hope”-Flyover 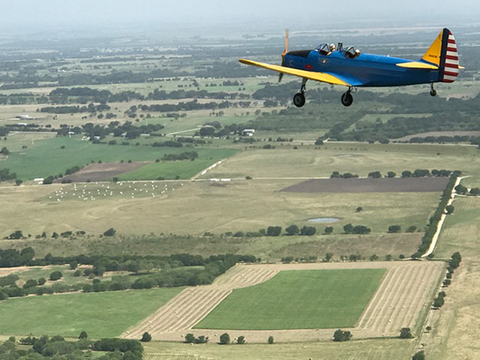 Both planes made a flyover to Navarro County much like the event of “United We Fly – Fourth of July” which included these two planes and four member planes. This time the two historic military aircraft, the Fairchild PT-19 and the Beechcraft T-34 took the time to circle around the towns along the way as a way of saying thanks to the American people and especially our Veterans and to pay homage to the End of WWII.

“Salute Their Service, Honor Their Hope” was the theme of the Commemoration in recognition of the veterans and civilians who participated in WWII and contributed to the actions that led to the end of the war.” In Hawaii 14 classic combat aircraft will participate in three Legacy of Peace Aerial Parades taking place over Oahu, the Battleship Missouri Memorial and Pearl Harbor.