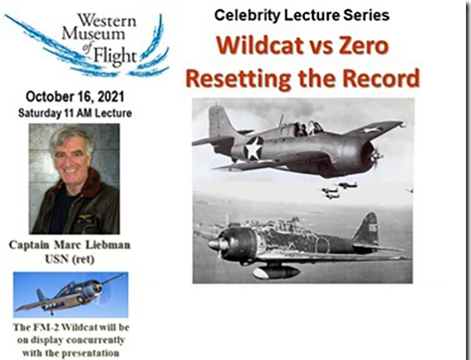 Date & Times: October 16, 2021@ 11 AM. Conventional wisdom say that early in WWII, the Japanese Zero Fighter Planes ruled the Pacific skies and that the F4F Wildcat was no match for it. In fact the combat record says otherwise. Although later, American fighters including the F4U Corsair and F6F Hellcat, were major technological improvements, the venerable Wildcat flown by well-trained Navy and Marine aviators racked up a very favorable win/loss record against the Zero.

Veteran Navy aviator, Captain Marc Liebman, will describe the relative weaknesses of the Wildcat and explain how it still proved to be the superior weapon system.