A Memorial Day to Remember

SAVANNAH, GA (May 30, 2022) - Memorial Day weekend 2022, B-17 Texas Raiders was in Savannah, Georgia, home to the National Museum of the Mighty Eighth Air Force. Each Memorial Day, the museum plants 26,000 flags in the ground to represent the 26,000 8th Air Force crewmen who gave their lives during World War II. All weekend long they read each name out loud. Members of the CAF Gulf Coast Wing were proud to be a part of the ceremony, flying over the grounds both for the opening ceremony on Thursday and the closing ceremony on Monday.

They were also pleased to provide rides for several veterans in attendance. The first veteran, John "Lucky" Luckadoo is the last living original pilot of the Eighth Air Force 100th Bomb Group. Heavy losses early in June through October 1943 earned them the sobriquet "The Bloody Hundredth." No other combat unit sustained as many heavy losses as the Group's original flight crews. Only four of the original thirty-eight co-pilots completed their combat tour of 25 missions, and Lucky was one of them.

The second honored guest was 100-year-old B-17 veteran waist gunner Cassimer "Cassey" Bukowski. In 1944, Cassey's bomber was shot down and he became a POW. When his airplane was hit, he was injured and in and out of consciousness such that he doesn't even remember getting out of the aircraft! He was captured and treated by the Germans and remained a POW until the end of the War.

The third veteran passenger was Bruno Gallerani who was a Flight Engineer and top turret gunner on the B-17 Jolly Roger, which was shot down near Antwerp. Only five of the crew managed to bail out, three of them thanks to Bruno's help. Bruno landed safely and went on a 30-day odyssey across Europe, aided by resistance fighters, before returning to his base in England.

Last but not least was P-38 & P-51 pilot James Frolking. A fighter pilot who flew his first mission on D-Day, patrolling the English channel for enemy aircraft, he went on to fly 50 more, mostly escorting B-24 and B-17 bombers. On October 7, 1944, his airplane was hit by enemy fire, and he bailed out over the Netherlands. He eventually made contact with the Dutch underground. For three weeks, he was put up and cared for by a Dutch family, while Germans patrolled the surrounding area.

Honoring these veterans with a flight in Texas Raiders isn't thanks enough for everything these men have done, but it was certainly an honor for the CAF to have an oppurtunity to do so. These things are only possible through the hard work and dedication of our members. If you are interested in joining the CAF, please click here.

P.S. While on the Road 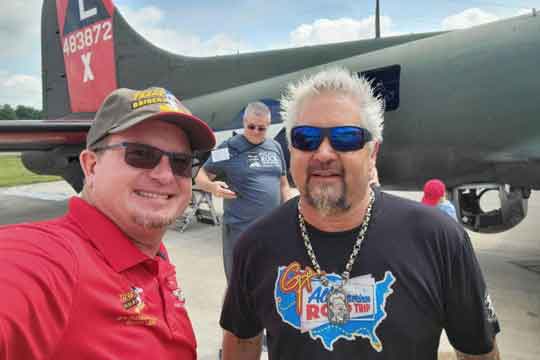 You never know whom you'll bump into on tour! In this case, celebrity restauranteur, author, and Food Network host Guy Fieri was stopping in Bowling Green, Kentucky for jet fuel when he spied the B-17 Texas Raiders and made a beeline for the bomber! He didn't have but a minute to check out the vintage aircraft, but enough time to snap this great photo!