Ariticle written by Annie Flodin published for The Boeing Company on August 23, 2022

During World War II, the United States produced an astounding 300,000 airplanes, from transports and escorts to fighters and bombers. Boeing and its heritage companies built nearly a third of them. This incredible feat was the result of a challenge set by President Franklin D. Roosevelt. Even before the U.S. entered the war, he called on Americans to build what he called the “Arsenal of Democracy” – a large, coordinated effort to quickly build large quantities of airplanes and weapons to support the Allied war effort.

Three-quarters of a century later, a number of these historic warbirds are still flying thanks to the preservation work of organizations like the Commemorative Air Force (CAF). Airbase Arizona, the CAF’s Mesa-based chapter, recently brought one of its prized bombers to Seattle’s Boeing Field as part of its summer tour. The aircraft, a Boeing B-17G Flying Fortress named Sentimental Journey, was on display just outside the Museum of Flight on the south end of the airfield. During its five-day stay, it was open to the public for walk-through tours and made more than a dozen scenic flights around Puget Sound.

Sentimental Journey was built by Boeing heritage company Douglas Aircraft Co. and delivered to the Army on March 13, 1945, to be used in the Pacific Theater. After the War, the plane was used as an air-sea rescue craft. In 1951, having been converted to a DB-17P, Sentimental Journey participated in “Operation Greenhouse” – an atmospheric nuclear weapon test series conducted by the U.S. Throughout the '60s and '70s, the airplane served as a fire bomber, flying thousands of sorties throughout the country.

Sentimental Journey was donated to the CAF in 1978, the same year the Arizona Wing was formed. Wing members immediately began cleaning and polishing the plane, in addition to training crews to fly it, but a much larger restoration effort began in 1981, which included rewiring, installing turrets and restoring various crew stations. Boeing provided a number of photographs and engineering drawings to help with the project. By 1986, Sentimental Journey was making about 60 appearances per year across the U.S. Today, it’s considered the most authentically restored flying B-17 in the world.

Though he didn't get a chance to fly the B-17 with his dad, Churchill still feels a connection to him whenever he flies it. Over the years, Dick taught a number of people how to fly Sentimental Journey, and those pilots subsequently taught Brian. "I do think about the fact that he used to fly it, and it puts a smile on my face," he said.

Dick Churchill was part of the crew that brought Sentimental Journey to Boeing Field in July 1985 to commemorate the 50th anniversary of the B-17’s first flight. Roughly 14,000 World War II veterans attended the event, which was sponsored by the Boeing Management Association, and another 12,000 people came out to view and tour the restored warbird.

With roots dating back to the 1950s, the Confederate Air Force was officially formed as a nonprofit in 1961. It became the Commemorative Air Force in 2002, following a membership vote to rename it. Today, the group maintains and flies more than 175 historic warbirds representing more than 60 different types. Known as the CAF Ghost Squadron, it is the world’s largest flying museum and ranks as one of the largest air forces in existence.

The CAF’s mission is to educate, inspire, and honor through flight and living history experiences. That includes honoring the veterans who flew these planes during World War II, as well as the men and women who helped to build and maintain them. Sentimental Journey’s bomb bay doors are covered with dozens of signatures, from pilots and gunners to navigators and even Rosie the Riveters. Any time someone with a personal connection to the B-17 comes out to see, or even fly in, Sentimental Journey, it’s a special day for the CAF.

To fulfill its mission to educate and inspire, the CAF education department offers a number of programs and resources based on age and interest. Additionally, the planes themselves are used as tools for teaching students about STEM (Science, Technology, Engineering and Math) aviation sciences and history, which can help them develop leadership skills and generate interest in aviation-related careers.

I was fortunate to join the crew of Sentimental Journey on their flight from Seattle, to Arlington, Washington, for Arlington SkyFest, where the B-17 was the star of the show. From there, the plane flew to Oregon, where it was joined by the chapter’s B-25J Mitchell, Maid in the Shade, built by Boeing heritage company North American Aviation. The tour wraps up in California mid-September.

The CAF prides itself on its volunteers, and is able to continue its preservation work through donations and memberships. The organization currently boasts about 13,000 members across more than 75 units worldwide. 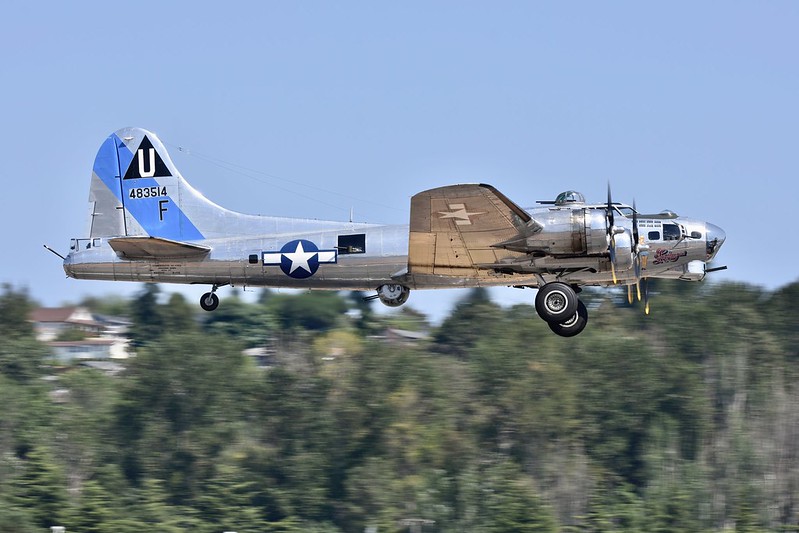 All photos taken by Annie Flodin unless otherwise noted.

About the Boeing B-17 Flying Fortress:

In 1934, the U.S. Army Air Corps issued a request for a large, multiengine bomber. Boeing’s prototype Model 299 went from drawing board to flight test in less than a year, making its first flight July 28, 1935. Sadly, tragedy struck on Oct. 30, 1935, during a competitive fly-off at Wright Field in Dayton, Ohio. The Model 299 crew forgot to unlock the control surfaces, and the prototype crashed immediately after takeoff, killing Maj. Pete Hill and Boeing test pilot Les Tower.

Although Boeing’s design was clearly superior, the Model 299 was immediately disqualified. The competition was now down to the Douglas DB-1 and the Martin Model 146. The Army ultimately selected the Douglas design, designating it the B-18 Bolo. As a result of the Model 299 crash, Boeing and the Army introduced the concept of the preflight checklist to prevent similar incidents in the future. And, despite Douglas winning the competition, the Army was still so impressed by the Boeing design that it placed an order for 13 Y1B-17s just a few months later.

The B-17 became an icon of World War II, primarily used as a daylight precision bomber and hailed for its ability to sustain heavy damage during battle. By the end of the war, nearly 13,000 B-17s had been built by Boeing in Seattle, and by Douglas and Lockheed (through its Vega subsidiary) – both in California.