Burnet, Texas, November 21, 2019- Mr. Karl Ritter of Brady, TX generously donated the C-47 Texas Zephyr to the Commemorative Air Force’s Highland Lakes Squadron based at Kate Craddock Field in Burnet, Texas. Texas Zephyr was manufactured in 1945 by the Douglas Aircraft Company in Oklahoma City. The aircraft was a model C-47B which carried the military designator until its civilian adaptation when it was re-designated as a DC-3. Texas Zephyr was formerly known as the Spirit of Hondo, based out of Hondo, Texas and was a staple at airshows across the country.

The Highland Lakes Squadron had been seeking a replacement C-47 airplane after the tragic loss of the squadron’s Bluebonnet Belle (also a C-47) in 2018. Recent research suggests that Texas Zephyr and Bluebonnet Belle were both assigned to the same air wing during their time in service with the Royal Canadian Air Force.

In 2014, to celebrate Independence Day, the late Lt. Col. Dick Cole, member of the Doolittle Raiders flew in the Texas Zephyr, an experience facilitated by the Texas Historic Aviation Group. Lt. Col. Cole memorialized the experience by signing his name to the aircraft’s bulkhead. 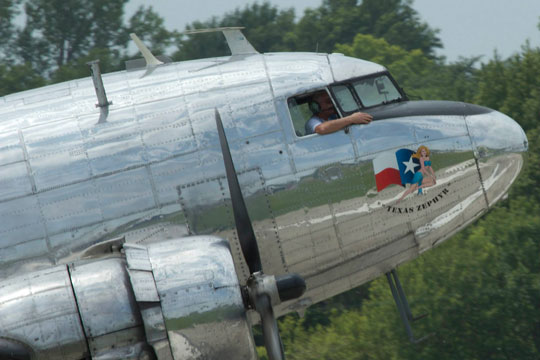 Ritter expressed that he wished to see Texas Zephyr restored to its original glory and believes that the Commemorative Air Force’s Highland Lakes Squadron would be best suited to do just that. Texas Zephyr is currently positioned at the Brady Curtis Airfield and will require some mechanical work prior to relocation to Burnet, Texas. This will hopefully take place by the summer of next year, just in time for the Bluebonnet Air Show scheduled for September 26, 2020. David Vaughn, City Manager for the City of Burnet expressed “It is exciting to see the return of such a historic plane to our community and we cannot wait to see it once again gracing the skies over Burnet.”

The Highland Lakes Squadron has been operating since 1992 and is an important organization within the community. Bluebonnet Air Show Chairman Kirk Noaker remarked “I’m excited that we’re able to add *Texas Zephyr *and its 74 years of aviation history to the Squadron and the City of Burnet’s Municipal Airport.” A few weeks ago, David Bonorden, the Highland Lakes Squadron Leader, shared the news of the acquisition with the group’s members. The members, who will now volunteer hours to maintain and operate the aircraft, had the opportunity to meet and personally thank the Ritter family for the generous donation. “We’ve always considered ourselves a C-47 squadron… this just made sense. We’re very grateful for the generosity of Mr. Ritter and we’re committed to making this airplane the very best it can be,” said Bonorden.