Cadets Get Qualified As Aircrew on B-17 "Texas Raiders"

Conroe, TX (August 20, 2022) - History has been made in the Gulf Coast Wing Cadet Program. For the first time in at least a dozen years, perhaps in the history of the Gulf Coast Wing, Cadets are getting qualified to fly as aircrew on B-17 Texas Raiders. On August 19, 2022, Cadets JT Mounce and Robert Buniva attended Load Master School at the Wing. The course was taught by Lead Load Master, Col Michael Hart. Both these Cadets are pilots, Buniva is a commercial pilot with an instrument rating who is beginning training on his multi-engine rating, and Mounce is a private pilot taking his instrument rating check ride on August 22, 2022.

Load Master training included classroom academics as well as practical experience in giving passenger briefings and loading the aircraft. Both Cadets completed Private Pilot Ground School as part of the Gulf Coast Wing Cadet Program. Passenger management is a huge part of being a Load Master, but the heart of this position is aircraft weight and balance which the Cadets learned in ground school. These skills are key in flight safety as well as Crew Resource Management (CRM) which is another topic covered in Private Pilot Ground School. CRM has proven over many decades to contribute to aerial flight safety and these Cadets will use it as Load Masters when working with Pilots and Flight Engineers. Increasing Cadet participation in Gulf Coast Wing activities, especially in highly sought aircrew positions, helps the Wing in mission capability and offers Cadets skills that can catapult them into aerospace careers.

On deck for the Gulf Coast Wing Cadets is the completion of Boeing 737-800 Ground School. On August 25, we visit the United Airlines aircraft maintenance facility at Houston Intercontinental Airport and conduct a preflight inspection on a United Airlines Boeing 737. After this, we drive to Dallas Texas to visit the Southwest Airlines Flight Training Facility where the Cadets will get to fly the Boeing 737 NG flight simulator. Plans after this are to visit NASA so that Cadets can see yet another positive path in the wonderful world of AEROSPACE. 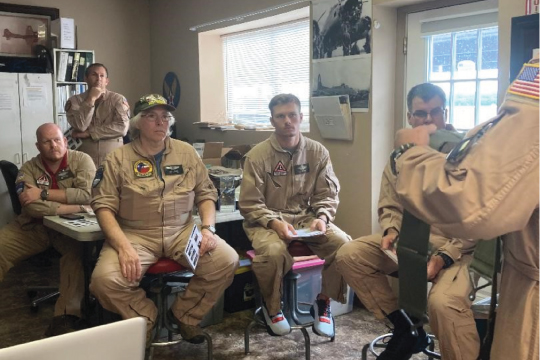