**Peachtree City, Georgia, July 22, 2020 **- The Commemorative Air Force Dixie Wing in Peachtree City, Georgia has begun restoring a Stearman (Boeing) N2S-2 Kaydet which they acquired last August. CAF Dixie Wing volunteers were able to kick off the restoration process in person in July. The unit intends to use this aircraft restoration project as a way of honoring “Rosie the Riveter,” the cultural icon who represented women workers at factories and shipyards during World War II.

CAF Dixie Wing member, Robyn Rosenzweig, who works as a business manager at a medical laboratory during her day job, told Warbird Digest Magazine: “This is a great opportunity for us female members to contribute to the mission of the CAF in a very meaningful way. During World War II, women took on a variety of disciplines previously closed to them, but it was the aviation industry that saw the greatest increase in female workers. Indeed, more than 310,000 women worked in the U.S. aircraft industry during 1943; they comprised fully 65% of the industry’s total workforce, compared to just 1% in pre-war years. The intent of this project is to encourage more women to get involved in the CAF, and aviation as a whole. In a way, we are like those women who came from all walks of life and took on the tasks of building airplanes, ships and tanks in American factories. We all have regular jobs, but we want to contribute to the restoration of this Stearman, and honor all the Rosies in the process.”

The Dixie Wing’s N2S joined the U.S. Navy as Bu.03531 on July 9, 1941. Her first assignment was at Naval Air Station (NAS) Corpus Christi in Texas. The Navy then transferred the Kaydet to a Naval Reserve Air Base in Detroit, Michigan on April 9, 1942. Her next assignment involved moving on April 1, 1944 to Naval Air Intermediate Training (NAIT) at Rodd Field, back in Corpus Christi, Texas. The aircraft then moved to join the aircraft pool in Dallas that November, with the Navy striking her from their books on November 30.

Earlier this year, the Dixie Wing realized that their most immediate task was freeing up extra space at the museum to start a proper parts inventory process. With the Dixie Wing’s restoration shop already occupied by wings from the Ryan PT-26 belonging to the CAF’s Heart of America Wing (Dixie Wing members are helping a sister unit), they decided to purchase a 40ft shipping container to use as a storage facility. Members constructed and installed shelves and hardware inside the container, thus allowing them to properly store the parts from both airplanes and begin the inventory process.

The unit acquired a second airframe from near Austin, Texas in February. Maintenance Officer Randy Hawkins explained the reasoning, stating: “I was surfing the Barnstormers website, and I came across an ad for a Steaman project for sale. The condition seemed great and the price was even better. I decided to visit the seller in Texas, and when I saw the project, I knew right there that we could not pass up such an awesome deal.”

After settling up with the previous owner, the Dixie Wing had the airframe transported back to Georgia by road. Hawkins noted: “This second airframe will allow us to jump start this restoration and save a lot of time. The previous owner has done an incredible job with the airplane and, as a result, our volunteers can start this project already with a stand-alone airframe.”

CAF Member Moreno Aguiari is the project manager for the Stearman rebuilds, and shared more details about the decision to acquire this second airframe: “We did not plan to acquire a second airframe, as our economic resources are pretty slim, but this deal made sense. After Randy visited with the owner of the airplane and provided positive feedback, we took into consideration all of the pros and cons, and it very much made sense to pull the trigger. While the acquisition will dry out our bank account in the short term, it will allow us to save money in a long term, and cut a considerable amount of time on the restoration project.” 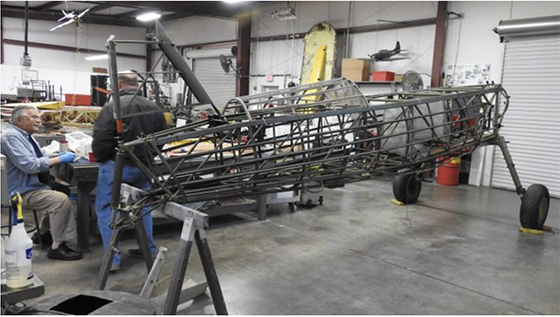