FAA FASTeam manager Roger Williams and FAA representative/Dixie Wing member Reinhardt “Rik” Carlson presented the awards at the Dixie Wing Warbird Museum in Peachtree City. Each pilot received a certificate, gold lapel pin and an official copy of his airman records as maintained by the Airmen Records & Certification branch in Oklahoma City, Okla. Also, all three names will be recorded in the Aviation Safety Roll of Honor at the FAA headquarters in Washington, D.C. (numbers TBD). 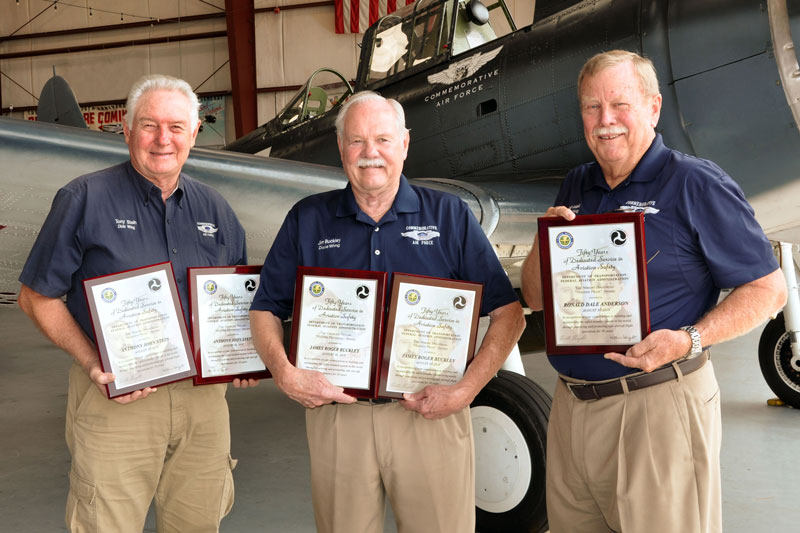 “Presentation of these awards is intended to recognize and celebrate the lifetime commitment and accomplishments of pilots and mechanics such as Andy, Tony and James,” Williams said. “They have continuously presented a positive image of the FAA in respect to aviation safety.”

The Wright Brothers Master Pilot Award requires 50 years of military and/or civil aviation experience showing a high degree of professionalism and dedication to safety. It is named after brothers Orville and Wilbur Wright, who first flew in 1903. The prestigious Charles Taylor award is named in honor of the first aviation mechanic in powered flight, and recognizes and celebrates the lifetime accomplishments of senior mechanics and aviation repairmen. Taylor was the first true aviation mechanic, working with the Wright brothers on their first successful powered flight.

The new awardees were joined by 10 of the 12 CAF Dixie Wing members who previously received the Wright Brothers and/or the Charles Taylor awards, demonstrating the depth of experience and safety within the Wing. Collectively the Wing’s award winners have amassed more than 405 years in maintenance and 615 years of flying, with more than 187,900 hours of flight time. 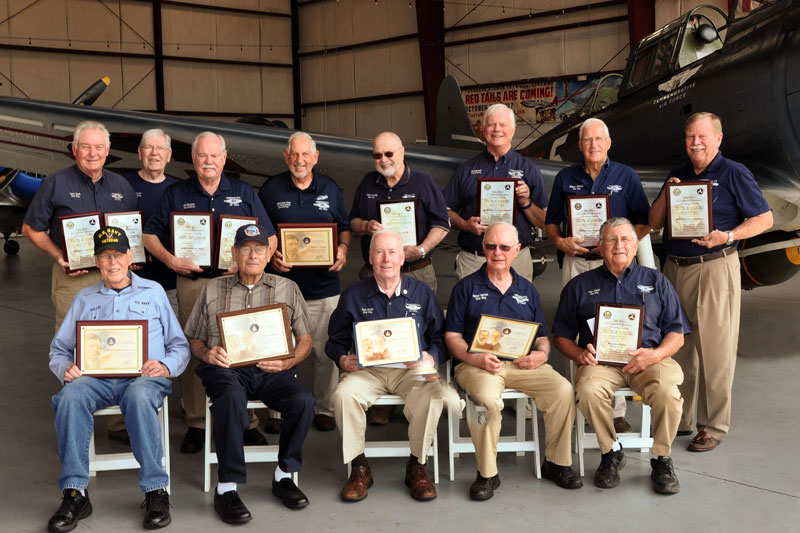 Ronald D. “Andy” Anderson– Andy soloed a Citabria aircraft on his birthday in 1967 during his sixth flying lesson. After earning a Bachelor’s degree in Aeronautical Engineering, he served in the U.S. Navy. He flew S-2 and S-3 aircraft performing anti-submarine missions from the decks of the USS Independence (CV-62) and the USS Dwight D. Eisenhower (CV-69). He later trained NFO students flying the T-2C aircraft. After leaving the Navy, Andy flew for Delta Air Lines for 26 years and NetJets for eight years. Andy has flown for more than 52 years and has more than 22,000 flight hours. He currently volunteers at the CAF’s Dixie Wing working in the finance department and flying the PT-19A and T-34 aircraft.

James R. “Jim” Buckley– Jim’s aviation experience began very early in his life. His father was his mother’s flight instructor when she was in college. Flying seaplanes and landplanes was just part of growing up in the family. More formal training in flying and maintenance was gained in high school. Jim soloed in December 1964 and continues to fly today. He currently volunteers his time with the CAF, passing on his knowledge to pilots and mechanics. He has earned multiple licenses including A&P mechanic and Airline Transport certificate. In his 55 years of flying experience he has amassed more than 24,000 flight hours and has landed on every continent except Antarctica.

Tony Stein - Tony started his aviation career while on active duty in the U.S. Air Force, flying in the Aero Club at Keesler AFB in Mississippi. At Keesler AFB he attended Air Force Avionics training for the F-102 aircraft. He earned his Private Pilot license in March 1968. He then attended Blackhawk Technical College, earning his Airframe and Powerplant mechanic license in July 1969. After leaving the Air Force he worked as an avionics technician and aircraft mechanic at Kimberly-Clark Corporation. He earned his advanced ratings as a pilot and changed careers within the company, becoming a corporate pilot in Alabama. At Kimberly-Clark he flew the Cessna Citation, King Air, Hawker jets, Canadair Challenger, and Gulfstream G-5 aircraft and retired in Dallas, Texas as Chief Pilot in 2008. He has always been an active general aviation pilot and flight instructor as well as an A&P mechanic. Tony has volunteered his time at the CAF’s Dixie Wing since 2009, helping maintain and fly various World War II warbirds.

About the CAF Dixie Wing Warbird Museum The CAF Dixie Wing, based in Peachtree City, Ga., was founded in 1987. The Wing, one of the largest units of the CAF, maintains and flies seven WWII aircraft including a P-51 Mustang, an FG-1D Corsair and rare types such as the SBD Dauntless dive bomber and P-63A Kingcobra. The unit, composed of 300 volunteers, is a non-profit, tax-exempt organization that relies on contributions of time and funds to carry out the mission of the CAF. www.dixiewing.org

About the Commemorative Air Force The Commemorative Air Force (CAF) is the world’s largest flying museum. For more than 60 years, the CAF has been dedicated to education, inspiration and honor through flight and living history experiences. The organization maintains airplanes in flying condition, taking them to communities across America to experience first-hand the sight and sound of the aircraft in flight. The CAF is a non-profit educational association with more than 11,000 members and a fleet of 172 vintage military aircraft throughout the U.S. www.CommemorativeAirForce.org