PEACHTREE CITY, Ga. (Aug. 19, 2019) - U.S. Marine Corps WWII veteran Grover Burdell Sassaman of Macon, Ga., will reunite with the aircraft he worked on more than 70 years ago, thanks to the Commemorative Air Force (CAF) Dixie Wing in Peachtree City, Ga. Pilot Wes Stowers will fly the Wing’s restored FG-1D Corsair to Macon Regional Airport at noon Sunday, Aug. 25, to give Sassaman a close-up look at the aircraft type he worked on as a mechanic in the South Pacific Theater during WWII. Sassaman, 98, is known in the Macon area for the Harley-Davidson dealership he established after the war, and he has been recognized as the oldest Harley-Davidson dealer in the United States. 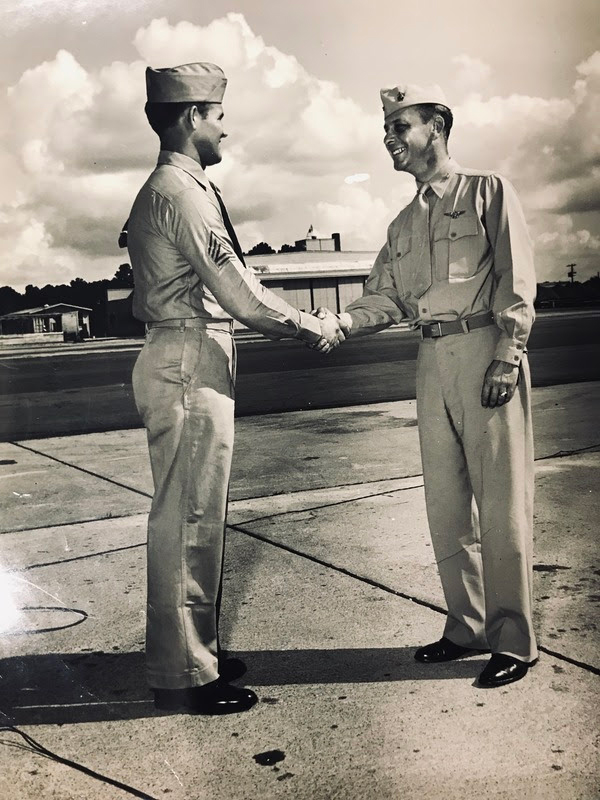 He joined the Marines in May 1942 and was shipped to the Pacific Theater after training. His service included the islands of New Caledonia, Guadalcanal, Bougainville and New Hebrides, among others. His notable history includes servicing the Black Sheep Squadron of F4U Corsairs under the leadership of famed Maj. Greg “Pappy” Boyington, Marine Fighter Squadron 214 (VMF-214), in the Solomon Islands campaign.

Sassaman once combined two damaged F4U Corsairs, one damaged in the front and the other damaged in the rear, to make one aircraft that returned to combat. He later embarked with Gen. Douglas MacArthur in the return to the Philippine Islands. Sassaman was injured in the Battle of Luzon and received the Purple Heart in March 1945. He left service in 1945 with the rank of Master Technical Sergeant.

“This is a great service for us to provide to a WWII hero,” said Dixie Wing Leader Jim Buckley. “Our mission is to preserve the sights and sounds of WWII aircraft for all generations, and when we heard of Mr. Sassaman’s desire to see the Corsair that meant so much to him, we felt it would be an honor to make that happen.”

About the CAF Dixie Wing Warbird Museum The CAF Dixie Wing, based in Peachtree City, Ga., was founded in 1987. One of largest units of the Commemorative Air Force, the unit maintains and flies seven WWII aircraft including a P-51 Mustang, FG-1D Corsair and rare types such as the SBD Dauntless dive bomber and P-63A Kingcobra. The unit, composed of 300 volunteers, is a non-profit, tax-exempt organization. http://www.dixiewing.org/

About the Commemorative Air Force The Commemorative Air Force (CAF) is the world’s largest flying military aircraft museum. For more than 60 years, the CAF has been dedicated to honoring American Military Aviation through flight, exhibitions, education and remembrance. Fulfilling its mission, the organization maintains airplanes in flying condition, taking the aircraft to communities across America to experience first-hand the sight and sound of the aircraft in flight. The CAF is a non-profit educational association with more than 11,000 members and a fleet of 174 vintage military aircraft distributed throughout the U.S. For more information visit www.CommemorativeAirForce.org