CAF Family Fly In at the Birmingham Escadrille Wing

The Birmingham Escadrille Wing hosted their first ever event on June 25 at Bessemer AL Municipal Airport. The unit held the “CAF Family Fly in” to introduce the Birmingham based unit to the CAF community.

The event was supported by the Mississippi Wing, the FloriBama Wing and Airbase George. Ride flights were provided by Airbase Georgia on the LT-6 Mosquito. Member owned aircraft on display included a T-6, L-19 Birddog, L-5 and T-34. After festivities and camaraderie around the aircraft, a shrimp boil ended the day.

The Birmingham Escadrille Wing was formed as part of the CAF's New Unit Initiative. They had their first organizational meeting in July 2021 and became an official unit of the CAF in December 2021. They now boast over 70 Colonel members; another Commemorative Air Force success story. 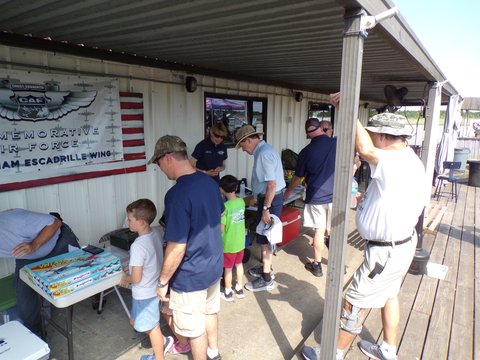