May 16, 2019, Dallas, TX - “After years of planning and fundraising, we are excited to see C-47 That’s All Brother *and C-53 *D-Day Doll participate in this historic mission,” said CAF president and CEO Hank Coates. “The CAF was founded to acquire and preserve the iconic aircraft of World War II. That’s All Brother and D-Day Doll both participated in the aerial invasion of France in 1944, and continue to fly today to honor our Veterans. We are privileged to participate in this once-in-a-lifetime mission.” 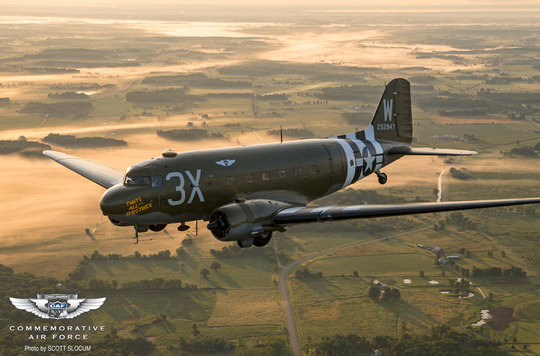 That’s All Brother, assigned to the CAF Central Texas Wing (San Marcos, Texas) and D-Day Doll, assigned to the CAF Inland Empire Wing (Riverside, California) are maintained and operated by volunteer members of the CAF. Both aircraft will be at Waterbury-Oxford Airport, Connecticut, from May 13 - 19, where they will be joined by other C-47/DC-3 aircraft from around the U.S. to make the trip across the North Atlantic. The CAF aircraft along with many other American aircraft are collectively called the D-Day Squadron. This group of 15 C-47/DC-3 aircraft will travel the Blue Spruce Route across the North Atlantic Ocean. Once in England they will be joined by more C-47/DC-3s to create a mass fly-over of the Beaches of Normandy, France, on the 75th Anniversary of D-Day. The ability for the CAF aircraft to go on this trip is made possible by support from Phillips 66 Aviation Lubricants, the premier sponsor of That’s All, Brother, Goodyear Aviation Tires, as well as, other corporations, organizations and individuals.

That’s All Brother was built in March 1944 by Douglas Aircraft Company in Oklahoma City. The airplane was ferried to England and selected as the lead aircraft of the main airborne invasion. In the early morning hours of June 6, 1944, That’s All Brother, followed by 800 other C-47s carrying more than 13,000 airborne soldiers, launched the first mass paratroop drop, marking the start of the liberation of Europe. The airplane also participated in Operation Market Garden (September 1944) and Operation Varsity (March – May 1945). The airplane returned to the U.S. in 1945 and was sold as surplus. The airplane had numerous civilian owners through the years. In 2015, the CAF, with cooperation of Basler Turbo Conversions in Oshkosh, Wisconsin, saved the aircraft with the intention of restoring the airplane to its World War II configuration and flying to Europe for the 75th anniversary of D-Day. 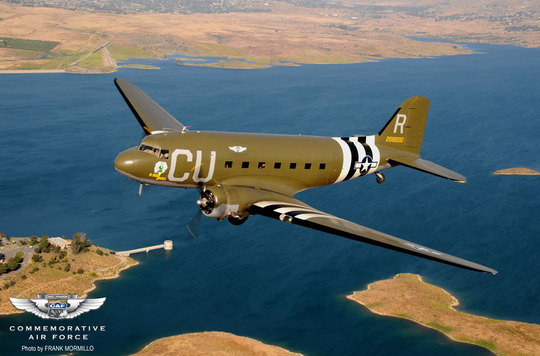 D-Day Doll was built at the Douglas factory in Santa Monica, California, and was delivered to U.S. Army Air Forces on July 7, 1943. It was assigned to the 434th Troop Carrier Group and was stationed at various locations before arriving at Royal Air Force (RAF) Aldermaston in March 1944. On D-Day, 52 of the Group's planes, each towing a Waco glider, took off from RAF Aldermaston Airfield for Normandy. D-Day Doll also flew in Operation Market Garden, the re-supply of Bastogne, the crossing of the Rhine, various support missions, and wounded evacuations to England.

Several events are planned at Waterbury-Oxford Airport before the D-Day Squadron aircraft depart the U.S. The public will have opportunities to tour the aircraft, there will be a flight down the Hudson River, and flight by the Statue of Liberty on May 18. The aircraft will proceed for Goose Bay, Ontario, on May 19, to prepare to cross the Atlantic Ocean.

Once in England the D-Day Squadron will meet up with other World War II aircraft for a massive flyover. The main event, Daks Over Normandy, will take place on June 5, 2019, where these aircraft from around the world will fly across the English Channel with hundreds of paratroopers reenacting the mass-paratroop drop of the Normandy Invasion.

About Commemorative Air Force (CAF): The CAF was founded in 1957 to acquire, restore and preserve in flying condition a complete collection of combat aircraft which were flown by all military services of the United States, and selected aircraft of other nations, for the education and enjoyment of present and future generations of Americans. Today, the CAF has nearly 12,000 members and a fleet of more than 170 vintage aircraft. Headquartered in Dallas, Texas, the CAF’s mission is to Educate, Inspire and Honor through Flight. For more information visit CommemorativeAirForce.org.

About the D-Day Squadron: The D-Day Squadron is the part of the Tunison Foundation, a non-profit 501(c)(3) charitable organization. In June 2019, the D-Day Squadron will lead an American fleet of historic, restored C-47 World War II military aircraft in Daks Over Normandy, a flyover of more than 30 international aircraft to drop 250 paratroopers over the original 1944 drop zones in Normandy commemorating the 75th anniversary of D-Day. Learn more at DDaySquadron.org.