April 19, 2019, Dallas – Commemorative Air Force (CAF) D-Day Wing is proud to announce that they will be attending the 2019 Paris Air Show. This is the first time that CAF aircraft from the U.S. have participated in the airshow which will take place at Le Bourget Exhibition Centre, just outside Paris near the Charles de Gaulle International Airport, from June 17 –23, 2019. The D-Day aircraft, C-47 That’s All, Brother and C-53 D-Day Doll will both fly and be on static display during the show. The aircraft will include this stop as part of this summer’s European tour. President and CEO of CAF and the aircrews of That’s All, Brother and D-Day Doll will be representing the organization at the airshow by showcasing these two iconic World War II aircraft. Both aircraft participated in the invasion of Normandy, and That’s All, Brother was the lead aircraft in the main aerial invasion.

“We are very excited and proud to represent America’s military aviation history in this international forum,” said CAF President/CEO Hank Coates. “The CAF has continued to restore, maintain, and fly World War II aircraft. We feel that it is important to see these aircraft in flight in order to carry out our mission to educate, inspire, and honor. This trip to Europe and participating in these major events is a example of our mission in action.” CAF D-Day Wing Leader, Joe Enzminger said, “We have been planning to participate in the 75th anniversary of D-Day in Normandy for years, I’m very glad we are able to add the Paris Air Show to our schedule. I think this gives thousands of people an opportunity to see these aircraft close-up. We will both fly and have tours of the aircraft open to the public. I can’t wait to see people’s reaction to the amount of detail that has gone into restoring these aircraft.” 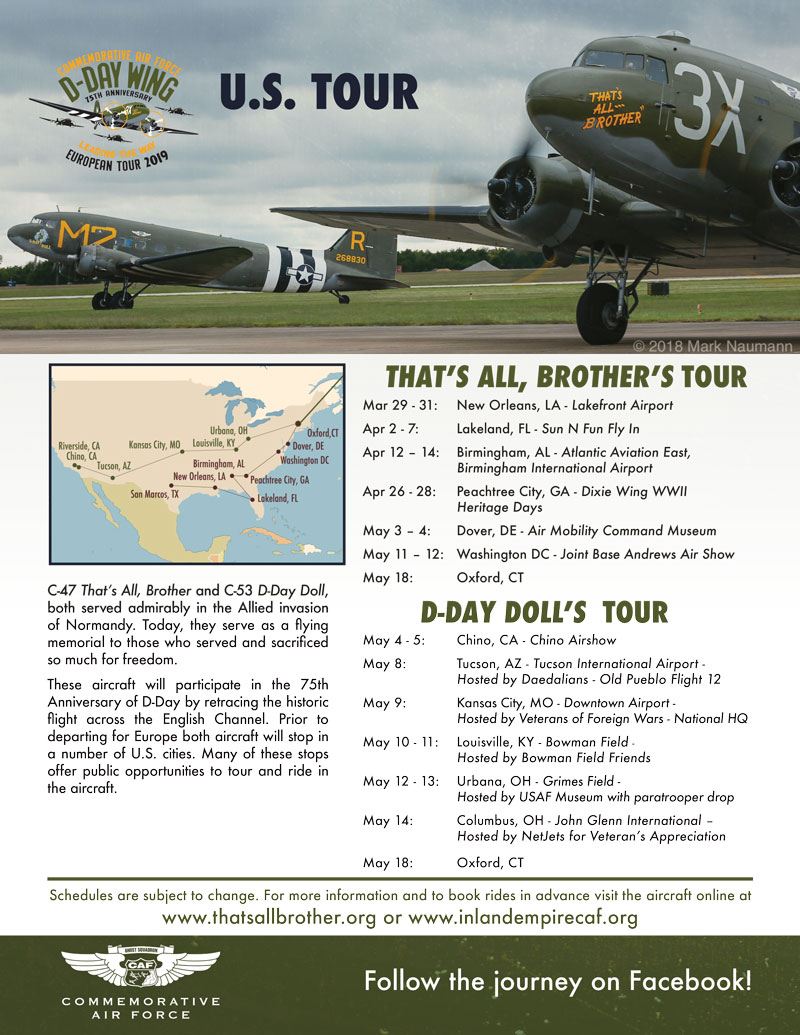 That’s All, Brother and* D-Day Doll* will tour the country before departing for Europe. That’s All, Brother will stop in Louisiana, Florida, Alabama, Georgia, and Delaware. D-Day Doll will stop in Arizona, Louisville and Ohio. The aircraft will leave from Oxford, Connecticut for the trip to Europe. The aircraft will be joined by 17 other American C-47s for the crossing of the Atlantic. The American fleet of C-47s, known as the D-Day Squadron, has spent years preparing for the epic journey. The D-Day Squadron will participate in “Daks Over Normandy” an event that commemorates the Allied invasion of Normandy by flying aircraft from Duxford, England into France with more than 200 paratroopers jumping into the historic drop zones, all wearing World War II era uniforms.

The preparation for the trip has been extensive, requiring thousands of dollars and hours to get the aircraft and crew ready to cross the ocean and return. The all-volunteer crews have worked to prepare the aircraft and complete additional training for the open water trip. Overseas the CAF French Wing members have been working hard to set up support for the European tour in country. In April, Phillips 66 stepped up to be a sponsor of the That’s All, Brother aircraft to help with some of the tremendous expense. To follow the mission to Europe and contribute to the organization, please go to www.commemorativeairforce.org/dday.

About the D-Day Wing The CAF D-Day Wing is a unit of the Commemorative Air Force. The wing consists of two aircraft and volunteer aircrews that will fly in formation with an American fleet of over a dozen vintage World War II aircraft across the Atlantic to join up with others in Europe to cross the English Channel into France in tribute to the original D-Day Allied force. These two aircraft, C-47 That’s All, Brother and C-53 D-Day Doll are part of the D-Day Squadron.

**About the Commemorative Air Force ** The Commemorative Air Force® (CAF) is a nonprofit organization dedicated to educating, inspiring and honoring through flight and living history. The fleet of over 170 airplanes is spread across the U.S. and is maintained and flown by volunteers. These World War II aircraft fly in order to honor the legacy of the Greatest Generation. Through historical reenactments and programs such as CAF RISE ABOVE®, the CAF educates and inspires young people to “rise above” their own challenges by using the real stories of heroes from American aviation history. Learn how you can support and participate in the CAF at www.commemorativeairforce.org. https://www.siae.fr/en/