Flying on the PBJ Semper Fi

July 20, 2019 - Camarillo, CA - Yesterday, I "slipped the surly bonds of Earth...put out my hand and touched the face of God." Not in a maudlin way! I did it with utter, carefree abandon, from the nose of the Camarillo CAF Mitchell PBJ-1J Semper Fi!!! I now have a permanent smile etched on my face, that started at 8:00 Saturday morning!! What an amazing adrenaline rush!! Ray, my husband, worries that I'll be talking about this for the next 3 weeks. Well, I did tell our son-in-law, the next time we see them, we have a 6.25-hour slide presentation. He said they weren't sure when we'd see them again. Hmmm! I wonder why!?

Semper Fi's pilots were Dana and Pat (call sign: Monk). I'm sorry, I didn't write down their last names. I was able to be in the nose during take-off. That 6' or 7' crawl to the nose, was the best crawl of my life!! From there and the roof turret, I took a lot of photos: the firing up the number 1 engine that coughed and produced lots of smoke, roaring down the runway and flying over Camarillo. On our way to the coast, we got "strafed" by the CAF's P-51 Mustang Man O' War! Absolutely perfect! I think the most beautiful and peaceful picture was one looking aft out of the roof. 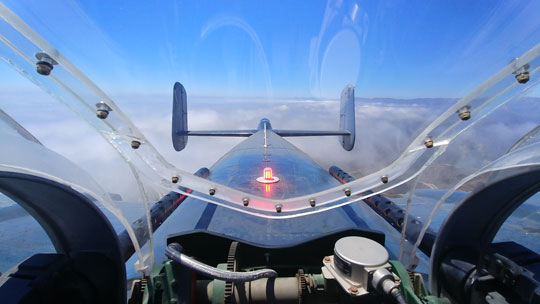 When we landed, someone asked how I liked the flight. SERIOUSLY??!! I told them all I did, was joyously scream a lot! The pilots were hysterical about that comment. They said they could hear me, even though my ear protection was not connection to their system! And, they said they heard me even over the din of her engines! I'm still not believing they heard me, though! But, someday, I'll have to see if I can scream loud enough for the pilots to hear me in DOC or FIFI!

Sadly, and probably much to your future chagrin, I joined the Camarillo CAF! So, as of yesterday, I, too, am an Honorary Colonel, like my Dad was! He joined in the mid-1950s, though, when the name was slightly different. Because I wore my CAF shirt with PBJ-1J patches on it, I looked official enough to fly in Semper Fi as a duly commissioned officer in the CAF!

After the guys "swore me in," one docent removed the "Visitor" label from my shirt and replaced it with a "Member" label. After looking around the museum for a while, I came back and said I was afraid another visitor would think was a docent and that I could help them. So, I asked for him to return my Visitor label. He laughed. Didn't help, though. Sure enough, a bit later, two visitors asked me what the .5 emblem on the 14.5 kill emblems on an aircraft battle lithograph meant. I told them, I am also a visitor, but that I think it meant the pilot assisted in a kill. I then told them to please ask one of the docents, because they WILL know. He returned later and said I was right. He then asked if he and his friend could go on the flight line to see Semper Fi and Man O' War. I said they needed to go with a docent before going past the chain. These question were definitely beyond my pay grade! So, I'm asking for a raise in pay!!

First thing Saturday morning, when one of the docents asked if I'll ever ride in the P-51, I said I "probably" would not. Although she was hit AND beautiful, after seeing her speed, agility and seeing her in action, I decided I "definitely" WILL NOT ride in her! But, maybe someday in DOC or FIFI. 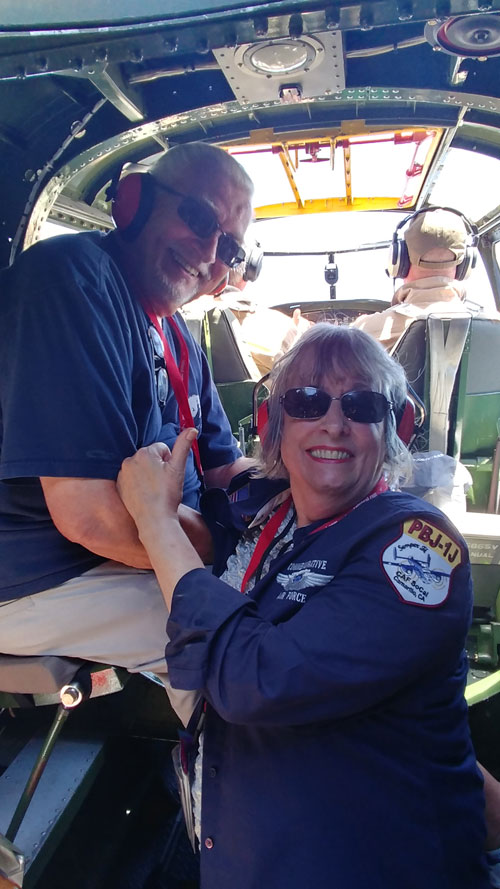 The Camarillo CAF staff, docents, crew and pilots are wonderful. It's heartwarming to see such camaraderie, skills AND knowledge! The airport, CAF hangars and museum are so well-maintained. I hope someday, there'll be more vintage aircraft and militaria to display.

I told the some of docents and the pilots my uncle's story about him piloting a B-25 and being KIA during the Aleutian Campaign of WWII, as being the reason I wanted to ride in a Mitchell B-25. And, I finally did that today! Although I live too far away to be an active Camarillo CAF member, I'll support you with my heart and our donations. Someone said they'd fly to Lincoln, CA, 6.5 hours driving-time away, to make me come down to volunteer my time, even if it's as a floor sweeper. Can't beat that offer! But, boy, I'll sure take a hit in the pocket book for a round-trip ride to sweep the floor! I think I'll need another pay raise!

From my heart, I thank you so much for making a dream come true and giving my husband and I the opportunity to meet such wonderful people at the Camarillo Commemorative Air Force!!