The Commemorative Air Force assigned Colonel Larry as the Primary Sponsor and Aircraft Coordinator for Gunfighter. As such, Lumpkin leads the team that keeps Gunfighter on tour.

Get to know Larry; Larry began his flying career in 1979 as a Flight Instructor in Omaha, NE after serving in the US Air Force. He instructed for 2 years while attending college. He began flying a variety of business aircraft as a corporate pilot until he joined a major airline in 1986. He has recently retired as an Airbus A320 Captain and has accumulated over 27,000 total hours of flight time, of which over 1,200 hours are in the P-51 Mustang.

Lumpkin has flown the Commemorative Air Force P-51 Gunfighter for 18 years. He has also flown two other WWII era fighters the F4U-4 Corsair and the British Hawker Sea Fury. He holds an unrestricted Statement of Aerobatic Competency in the P51 and T6 Texan. Larry is married and resides in Omaha, NE.

The History of GUNFIGHTER: Gunfighter is one of the world’s most famous P-51s, having appeared on the airshow circuit and providing rides for over 35 years. The aircraft is a P-51 "D" model, serial number 44-73264. Of the approximately 15,000 P-51s produced in WWII, over 8,000 were “D” models. Today, only about 150 airworthy examples of Mustangs exist world-wide in museums, flying or under restoration.

Gunfighter was built in the Inglewood, California North American plant and accepted into the USAAF in March, 1945. That month, it was shipped to England, where it was assigned to the famous 'Mighty Eighth' Air Force. In July of 1945, after the War ended in Europe, it was returned to the U.S. and assigned to Olmstead Field in Pennsylvania. In 1947 it was transferred to the Air National Guard and it thereafter served with units in Wyoming, New Mexico, Illinois and Kentucky. In 1956 it was declared surplus and sold on the civilian market.

Today, Gunfighter is operated by the Commemorative Air Force (CAF). The CAF is the largest operator of Historic Aircraft in the world with more than 170 aircraft and over 9,000 members. Gunfighter is restored in the colors of the 343rd Fighter Squadron, 55th Fighter Group, 8th Air Force, USAAF. The 55th Fighter Group was the first American Air Corp unit to become operational in Europe, first to fly over Berlin and was one of the units that provided top cover over the Invasion Beaches at Normandy on "D-Day", June 6th, 1944.

Gunfighter is powered by a Packard-built Rolls-Royce Merlin engine. It is rated at 1,490 HP and has a displacement of 1650 cubic inches. Top speed is over 400 mph and ceiling is 41,000 feet. Gunfighter has been modified to include a second seat where the original radio gear and fuselage fuel tank were located. This is a perfect vantage point to enjoy the ride of a lifetime in a P-51! 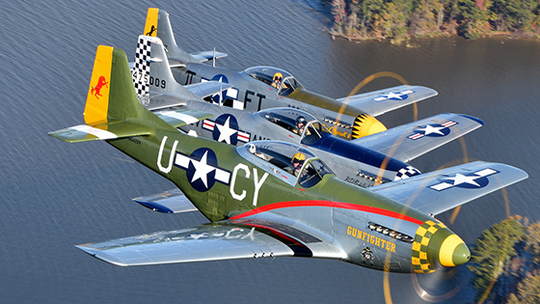 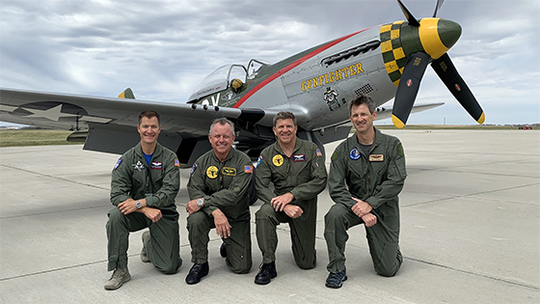