The Foggiani: American Pilots who Flew Combat for Italy in 1918

When the U.S. entered the Great War on April 6, 1917, the group of Americans flying fighter planes for the French, known as the Lafayette Escadrille, had been in combat for a year. They became well-known heroes then, and for over 100 years since.

In contrast and largely unknown, were the 500 Americans sent to fly bombers in Italy who contributed to victories against the Central Powers in 1918 and the advancement of military aviation. They were called the Foggiani and are the subject of a new and original exhibit opening in the CAF Airbase Arizona Flying Museum on September 17, 2022.

A recent artifact donation to the museum led to an extensive research effort by members of CAF Airbase Arizona and five Arizona State University students to determine the history behind the Foggiani Unit, their role in World War I, and their contribution to military aviation. A four-panel exhibit that summarizes the unit’s history is the result of this work. Along with the panels, the original artifacts that inspired the project are on display as well. 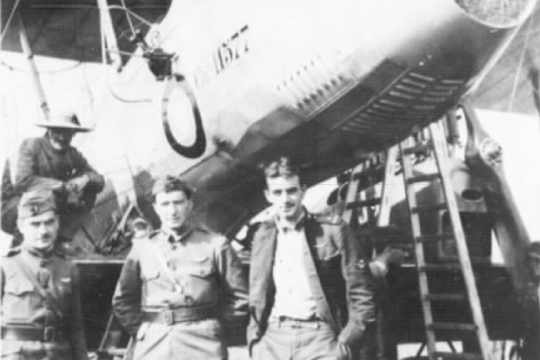 (Photo from the collection. The crew of a Caproni bomber that made the first American high-altitude flight over the Alps from Italy to France in 1918 as part of the war effort.)

The artifacts include about 300 original photographic prints and an Italian flight qualification document that was donated by Arizona resident Valerie Bierlein, a granddaughter of Lawrence Joseph, who flew in the unit from 1917 to 1918.

The museum approached Arizona State University to initiate an internship program. A team of five students provided substantial assistance in the research and curation of the historic items. Students worked over three semesters for a year on consequential parts of the project under the

mentorship of the museum staff. As fragile, rare, primary sources of the era, digitization of the photographs and documents was a high priority, which facilitated the ability to handle stable copies of each item for study and research.

The students, most of whom were enrolled in history or aviation programs at Arizona State University, directly contributed to accurate captioning of photographs, reconstruction of the essential history of the Foggiani unit and its role in World War I, and composition of proposed storylines for the final exhibit.

The museum is open Wednesday through Saturday from 10 a.m. to 4 p.m. and is located at 2017 N. Greenfield Rd., Mesa, AZ 85215 (northeast corner of McKellips & Greenfield intersection)