April 30, 2021, (Broomfield, Colorado)- Young Cody Green has had a challenging couple of years. Diagnosed in 2019 with Pediatric Myelodysplastic Anemia, Cody has spent months getting treatments, going to physical therapy, and even received two bone marrow transplants. One thing that always perks him up is to stop at the Rocky Mountain Metropolitan Airport. Well this week, Cody got more than he bargained for when he and his mom stopped because the Mile High Wing of the Commemorative Air Force was out there with their SNB-5 SoNoran Beauty. 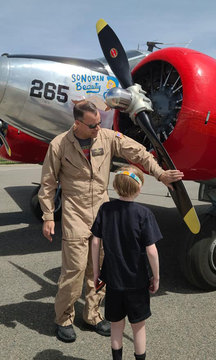 Cody's mother, Kerrie Anne Green said that they were making their near-daily trip up to the airport on the way home from physical therapy when Cody's day was made. He saw an old World War II airplane taking off. When Cody and his mom walked up to get a closer look at the aircraft, the pilots invited him out to the tarmac to look at the plane and talk to him about it. Kerrie said the pilots told Cody they would take him up in it in a couple of weeks. Kerrie and Cody are most appreciative, but we're equally sure it was the crew's pleasure!

According to the Mile High Wing Operations Officer, Jeff Hinkle, the crew would have given Cody a ride that day, but SoNoran Beauty just finished the annual and the pilots needed time for currency flights and check rides. Cody’s flight is scheduled for early May. You can learn more about the Mile High Wing online at http://www.milehighwing.org.

Do you have a #WhyWeFly story to share? Let us know at media@cafhq.org.