The 1940s WWII Era Ball is honored to commemorate the 75th anniversary of D-Day this year, with the world’s most popular and sought-after big band, the Glenn Miller Orchestra, LA’s Wartime Radio Revue, Hollywood’s Satin Dollz and re-enactors bringing Frank Sinatra, The Andrews Sisters and Bob Hope back to life for one special night.

Swing dancers will heat up the dance floor under a canopy of movie set lights while cigarette girls hand out rations. Attendees will have the opportunity to have their photos taken with WWII planes and military vehicles, stop by Casablanca's Rick's Café, mingle with WWII re-enactors, and dance the night away, all while enjoying top entertainment from the era.

“There is no other event in the world where you can step back in time and experience the sights and the sounds of the 1940s as the 1940s WWII Era Ball,” said Khyentse George, creator, and organizer. “Each year, we transform a real airplane hangar at the Boulder Airport into a vibrant home to historical reenactments, authentic WWII era military aircraft, and ball-goers dressed in period clothes to dance the night away,” George added. 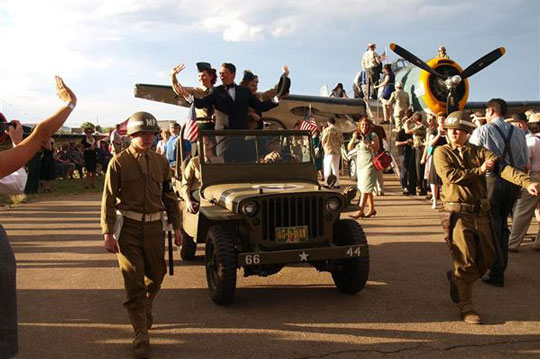 Highlights include: • 2019 Theme – A Salute to the USO Stars and Allies of D-Day on the 75th Anniversary – With a very special 5 Nation Promenade showcasing: spectacular sets, historic exhibits, multimedia displays + national foods! US, England, Canada, France + Poland — experience the countries that contributed to Allied D-Day Victory! • Glenn Miller Orchestra - With its unique jazz sound, the Glenn Miller Orchestra is considered to be one of the greatest bands of all time. The present Glenn Miller Orchestra was formed in 1956 and has been touring consistently since, playing an average of 300 live dates a year all around the world. • Planes of WWII Air Show - Experience the thrilling Planes of WWII Air Show at 7:30 p.m. There will be at least a dozen vintage aircraft on-site at the Ball, with many of them participating in the Air Show, including the TBM Avenger, C45, Mustang, and Stearman. • Victory Street - Saunter down our French Parisian Victory St. complete with a canopy of lights and a market and enjoy an al fresco coffee and crepe in the French cafe. • The Satin Dollz – Coming straight from Hollywood, these pin-up darlings, a stunning ensemble of singing, tap dancing, and downright charming ladies have enchanted audiences young and old, stateside and overseas, with their blended vocal harmonies, show-stopping tap dancing and stunning beauty wrapped up in a retro bow. • 1940s Drive-In Movie Theatre featuring authentic classic cars + concessions! • Grab a passport, visit + learn about the D-Day allied counties + play our interactive scavenger hunt! • Climb aboard Rocky Mountain Commemorative Air Force’s TBM Avenger! • Authentic Attire Contest - Six event attendees (three men and three women) will be selected from the audience to compete on-stage for the 1940’s Authentic Attire Contest. Audience applause chooses the winner. “We are so honored to be able to celebrate with those whose love for this era and support of the 1940s Ball have helped us reach this eleven-year mark,” said George. “We have guests from around the world who come to this event that honors our veterans, educates and introduces guests to ‘The Greatest Generation,’ and inspires future generations,” George added. 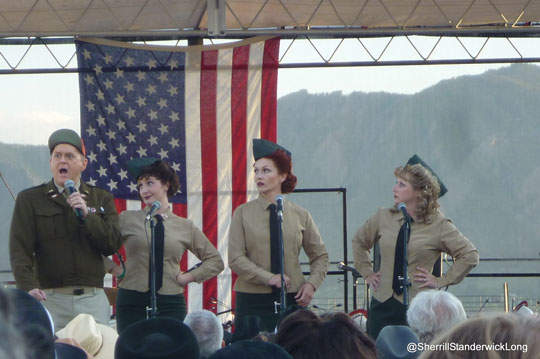 About The 1940s Ball: The 1940s Ball is a nonprofit organization that produces two annual events, the 1940s WWII Era Ball and the 1940s White Christmas Ball. The mission of the 1940s Ball is to create community and cultural connections that cross generations, genres, and borders through celebrating the music, dance, and culture of the 1940s. The Boulder, CO.-based nonprofit aims to provide quality performances and educational opportunities which will not only inspire those who already love “The Greatest Generation,” but will also introduce others to it. A portion of ticket sales is donated to select nonprofits including The Colorado 10th Mountain Division Foundation, The Commemorative Air Force, Rocky Mountain Honor Flight, The Audie Murphy Infantry Museum, and The Young Aviators 43. Since being founded, the 1940sBall has donated $96,000 to charity partners. For more information, visit www.1940sball.org or follow on Facebook, Instagram, and Twitter @1940sBall.