HARLINGEN, Texas (May 13, 2022)- Damian Leal, of Rio Hondo, grew up playing video games, many of which happened to be related to world wars. Little did he realize that his love for those games would lead to an education at Texas State Technical College. “These games introduced me first to military tanks and then aircraft,” he said. “I became very fascinated by them.” In high school, Leal grew curious about potential job opportunities that might be available with a connection to world war-based vehicles and airplanes. After he graduated from high school, he learned that Texas State Technical College offered an aviation maintenance program. 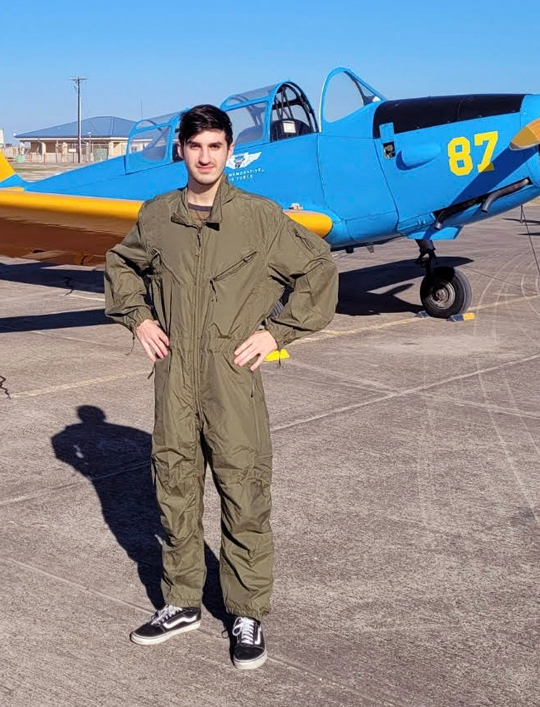 “I spoke with (Leo) Guajardo, TSTC’s aviation maintenance instructor in Harlingen, and I expressed my interest in aviation mechanics and how it piqued my interest,” he said. Now not only is Leal pursuing an Associate of Applied Science degree in Aircraft Airframe Technology at TSTC’s Harlingen campus, but he has also volunteered at the RGV Wing of the Commemorative Air Force in Los Fresnos through a suggestion from Guajardo. Leal has enjoyed his volunteer work at the aircraft flying museum. “It is a great experience,” he said. “Some of the aircraft are privately owned, but they are historic. The people, pilots and other volunteers I am surrounded by are very supportive.” His duties consist of aircraft maintenance and ground operations.

“Sometimes I will join a pilot on a flight in good weather to ensure the engines work efficiently,” he said. Leal will always remember two such flights in particular. “I recorded the experience with my cell phone after we departed the initial time,” he said. “Then I enjoyed it as a sightseeing experience the second time. The aerial view of South Padre Island and the Gulf of Mexico was incredible.” CAF Col Chris Hughston II, operations officer for the Rio Grande Valley Wing of the Commemorative Air Force, said it is not easy to find people like Leal. “It is particularly difficult to find young people who will give up their weekend to do hard work, and often uncomfortable labor with no pay,” he said. “Mr. Leal is one of those outstanding men who can and does sacrifice his time because he shares our passion.”

Guajardo noted that his student leads by example. “Leal is very passionate about historic vehicle and aircraft technologies,” he said. “It truly is a rare quality, but he is driven to surround himself with mechanical history.” The need for aircraft mechanics and service technicians in Texas is forecast to grow 8% by 2028, according to onetonline.org. The average salary for a technician is $66,710, the website showed.

TSTC offers Associate of Applied Science degrees and certificates of completion in both Aircraft Airframe Technology and Aircraft Powerplant Technology at its Abilene, Harlingen, and Waco campuses. Registration for the fall semester is underway. For more information, visit tstc.edu.