Summer Update from the French Wing

Villemaréchal, France (September 22, 2022) - The CAF French Wing has had a busy summer continuing the restoration of their Piper Cub and attending several fly-ins and airshows. They kicked off the season in May with a fly-in at their home airfield in Le Plessis-Belleville. They hosted over 30 vintage aircraft and held a barbeque with 200 guests.

In June, they participated in the La Ferte Alais Airshow, one of the largest annual airshows in France held at Cerny Airfield just south of Paris. In July, they participated in the Meaux Airshow at Meaux-Eslby Airfield. This year the Meaux Airshow paid tribute to the 80th anniversary of the Groupe de Chasse Normandie-Niemen, a group of French pilots who fought in World War II. The French Wing was honored to be a part of this tribute airshow. Nearing the end of the airshow season, they flew into the Cambrai Airshow in northern France where there was a Piper Cub patrol led by a French "Norvigie” from the Algerian War.

The French Wing's own Piper Cub, which is still in restoration, will soon be bearing the new livery of a NE1 of the U.S. Navy. They recently finished engine restoration work with the help of Aero Services Restoration, but are still searching for the final pieces needed to restore the instrument panel. To follow the French Wing and keep up with their restoration project click here.

Below is a photo album from the fly-in at their home airfield. 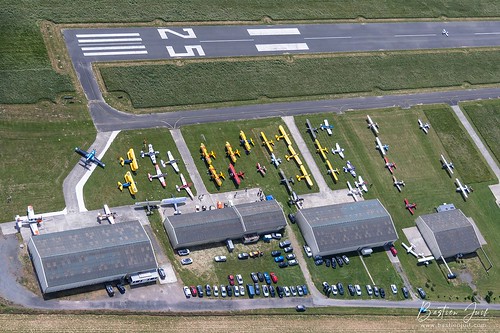