In addition to World War II, McGee served in the Korean War and the Vietnam War, accumulating an astounding 409 combat missions. His civilian service is marked by extensive honors including the nation’s highest civilian award, The Congressional Gold Medal. Today, at age 100, he remains an active role model to youth, promoting his mantra of personal success, “Perceive, Prepare, Perform and Persevere.”

The interview will be conducted by aviation artist, writer and filmmaker, John Mollison, as part of the award-winning history brand, Old Guys and Their Airplanes (OGTA). The Distinguished Flying Cross Society (DFCS) is sponsoring OGTA’s online, live “Debrief” interviews as part of their commitment to ensuring that the stories of its members’ heroic actions are made available to the general public. South Dakota Public Broadcasting (SDPB) is providing broadcast support, making the interview available at no cost to the public with emphasis on educators and group leaders. 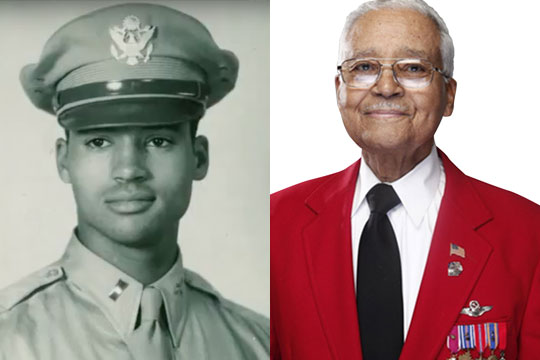 Fritz Miller, Director of Marketing for SDPB explains, “Our mission is to provide community outreach projects that educate, enlighten and entertain. When we learned how the DFCS and OGTA were working to continue their own missions of promoting American history, especially in this COVID-19 environment, we wanted to support their work.”

Bruce Huffman, Chairman of the Board for the DFCS, stated, “We have over 3,500 members and each one has a story that proves ordinary people can rise to meet extraordinary challenges. General McGee’s example personifies the achievements within our group and the values we hope to inspire in others.”

Mollison added, “There’s an old saying, ‘When an old man dies, a library burns.’ General McGee’s life is a huge library that all Americans can check out, learn from, and leverage for positive impact in our lives and communities.”

To watch the live Sept. 2 interview and learn how to participate in the Q&A opportunity, go to: https://www.sdpb.org/OGTADebrief