PEACHTREE CITY, GA. (April 30, 2018) – A record crowd helped welcome about 60 World War II veterans to the 15th Annual World War II Heritage Days at the Commemorative Air Force (CAF) Dixie Wing Warbird Museum in Peachtree City, Ga. Rare vintage aircraft, including the restored B-17 Flying Fortress, “Texas Raiders,” completed the WWII atmosphere for the veterans, especially for five who actually flew on the historic aircraft. Two were B-17 crewmembers who had not been on the bombers in more than 70 years.

“It was truly heartwarming to see children and guests of all ages take time to talk to these WWII veterans from 10 states,” said program co-chair Chris Madrid. “Their numbers are dwindling every day, but the veterans at WWII Heritage Days were happy to share their stories and receive thanks for their service. Among the attendees, one pilot flew three missions on D-Day in 1944, one veteran helped free prisoners at Dachau, Germany, and at least one was a prisoner of war.”

One family wrote after Saturday that their 89-year-old father had never felt so honored for his service, and he truly enjoyed talking to young children who came up to him during the day. He told his family he really felt like a hero.

Good weather on Saturday brought in record attendance of more than 3,000 people to meet the veterans, watch programs and demonstrations, buy flights in some of the vintage aircraft and witness a mock European battle created by reenactors. American Legion Post 50 provided hot sandwiches and the ever-popular Spam-burgers, and the Saturday night Hangar Dance was sold out for the fifth consecutive year.

The Dixie Wing saluted all Medal of Honor recipients during the weekend. The Hispanic Medal of Honor Society, based in Phoenix, Ariz., displayed five Medals of Honor, and several large panels with a history of the medal profiles of the 16 Hispanic Americans who received the honor during WWII. The National Museum of the Mighty Eighth Air Force in Savannah, Ga., also displayed a history of 17 Eighth Air Force airmen awarded the Medal of Honor during the Second World War. The Hispanic Medal of Honor Society also brought a 23-foot American flag flown from the USS Missouri battleship when it was recommissioned, and veterans held the flag for a special group photo.

“The mission of WWII Heritage Days is to celebrate the 1940s, salute the Greatest Generation and inspire all ages to preserve the legacy of America’s veterans,” said Jim Buckley, leader of the all-volunteer Dixie Wing. “This year we accomplished that goal while celebrating Medal of Honor recipients and WWII veterans and including the famous B-17, ‘Texas Raiders,’ for tours and rides.” 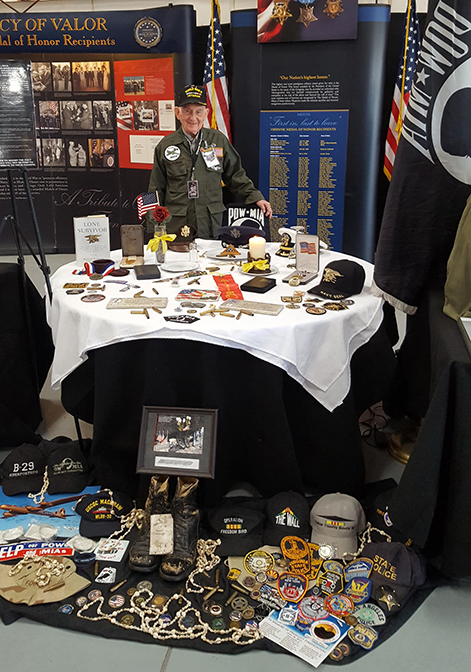 The CAF Dixie Wing, based in Peachtree City, Ga., was founded in 1987. The Wing, one of the largest units of the Commemorative Air Force, maintains and flies seven WWII aircraft including a P-51 Mustang, an FG-1D Corsair and rare types such as the SBD Dauntless dive bomber and P-63A Kingcobra. The unit, composed of 300 volunteers, is a non-profit, tax-exempt organization that relies on contributions of time and funds to carry out the mission of the CAF. For more information, go to www.dixiewing.org.

The Commemorative Air Force is a non-profit organization dedicated to flying and restoring World War II aircraft. Based in Dallas, Texas, the organization has more than 13,000 members and owns a fleet of 174 WWII aircraft. www.commemorativeairforce.org