April 8, 2021 (XENIA, OHIO) W&R Vets will host the largest birthday tribute of 2021 to celebrate World War II paratrooper Jim “Pee Wee” Martin’s 100th Birthday. The event will be at Skydive Greene County on Saturday, April 24, 2021. Three historic aircraft will fly over with a mass parachute drop to honor Martin, a paratrooper who jumped on D-Day as part of the 101st Airborne Division. The aircraft participating include, C-47 Placid Lassie of the Tunison Foundation, C-47 That’s All Brother and C-53 D-Day Doll are owned and operated by the Commemorative Air Force (CAF). All aircraft are also active members of the D-Day Squadron, which flew missions on D-Day and have been restored and preserved to represent their role in the Allied invasion of Normandy. The D-Day Squadron crossed the Atlantic summer of 2019 to participate in the 75th Anniversary of D-Day ceremonies.

“Collaborative efforts as these between multiple notable veteran organizations allows us to collectively fulfill our mission: commemorate the Greatest Generation that ever lived, expressed Lyndse Costabile, director of marketing, communications and corporate relations for the D-Day Squadron. “We also launched our Young Historians Program in fall 2020, and our young members are beyond ecstatic to witness history coming alive with surviving D-Day veterans, as well, flying museums through the legendary DC-3 dropping paratroopers – all to celebrate a milestone birthday for the amazing Pee Wee Martin. We are honored to take part in this historic event and cannot be more grateful to our friends at W&R Vets for pulling this together.”

Along with World War II demonstration teams, the U.S. Army 101st, 82nd Airborne Divisions, and Golden Knights are expected to participate.
Jim “Pee Wee” Martin, a Toccoa original, was a member of the “Screaming Eagle” 101st Airborne Division, some of the first Allied soldiers to set foot into occupied France.
Martin was given the nickname “Pee Wee” during training for his small stature. He served with G Company, 506th Parachute Infantry Regiment (PIR), 101st Airborne Division. In addition to parachuting into Normandy, Martin also participated in Operation Market Garden, and the Battle of the Bulge.

Pee Wee’s 100th Birthday Jump Fest will serve as a tribute to all members of the hailed Screaming Eagles, for their role as liberators of Europe and freeing citizens from Nazi Germany’s control.

The host, W&R Vets is a veteran-owned, nonprofit organization based in New Orleans, with a mission to support all U.S. veterans through events and financial support. “This may be the last time this group of Screaming Eagles will be together. We want to honor them while they’re still with us,” stated Dave Krasner, Founder and CEO of W&R Vets.

This event is free and open to the public. All attendees must comply with the event’s COVID protocols. All proceeds will support Pee Wee’s 100th Birthday Jump Fest. Find more information about the event and W&R Vets at https://wandrvets.org or follow on Facebook at https://fb.me/e/gMD2zZ13n or search by #JUMPFEST #JUMPFEST100 #PEEWEE100 #PeeWee100JumpFest. 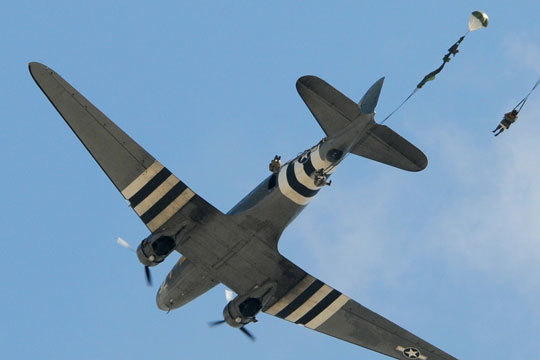