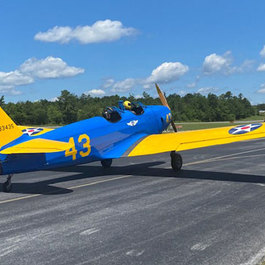 Our squadron of the Commemorative Air Force is named the Birmingham Escadrille in order to honor and pass on the rich aviation history and heritage of central Alabama.

The name comes from shortly after World War One, when former US Army flyers and ground crewmen from Birmingham came together, under the leadership of Maj. James Meissner and Henry Badham Jr., to form the first flying club in Birmingham, AL. They nicknamed it the “Birmingham Escadrille” in honor of the Lafayette Escadrille which was the first squadron of American flyers to fight in the Great War.

They leased a tract of land near Ensley to set up an airfield, which became Roberts Field, named after a fellow flyer killed during the war. The Birmingham Escadrille was recognized as the 135th Observation Squadron on January 21, 1922 under Meissner’s command and became Alabama’s first Air National Guard unit, and the 7th in the United States.

This squadron changed names twice more, the 114th Obs. Sqd in 1923, and finally the 106th Observation Squadron in 1924. The 106th is still in service within the Alabama Air National Guard, and is the oldest continually active ANG squadron in the country.

Many of the founders and proponents of aviation in Alabama were a part of this unit at various times. One of our goals with this website to periodically post the stories of influential flyers from the Heart of Dixie, our home, Alabama.