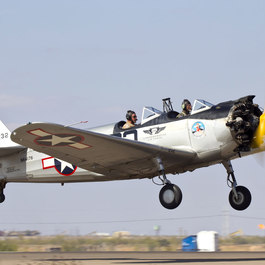 Acquired in 1990, this aircraft was completely disassembled. It had a Continental 220 engine with no prop. The center section had been removed from the fuselage. There were no instruments in the plane. Water damage, weather warping and stampeding cattle added to the challenge of restoration. As you can see from the photo, the PT-23 has come a long way. The PT-23 has been up and flying since July of 1999 after a 6 year restoration. Her maiden flight was on July 11 1999. This Fairchild PT-23 was used by the United States Army Air Corps as a primary trainer during World War II. The Air Corps pilots were trained in three stages: Primary, Basic and Advanced, before they were sent to... ... 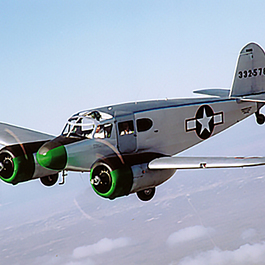 This Cessna UC-78 was used by the United States Army Air Corps as an advanced multi-engine trainer during World War II. The Air Corps pilots were trained in three stages Primary, Basic and Advanced before they were sent to operational units to fly the combat aircraft. The pilots trained to fly multi-engine airplanes in aircraft such as this UC-78. The UC-78 could hold one instructor and up to four students during a flight. The Air Corps began purchasing UC-78 aircraft from the Cessna Company of Wichita, KS. in 1939. The UC-78 was the military version of the commercial Cessna T-50 light transport. The UC-78 aircraft is powered by two Jacobs R-755-9 245 horsepower radial engines. The... ...

The CAF Jayhawk Wing was authorized and came into existence on November 21, 1987. It is now located at Westport Airport, Dead Cow International, 2558 S. Kessler, Wichita, Kansas. The Unit was Officially formed as the "Jayhawk Squadron" and the name was suggested by Astronaut Joe Engle. The Squadron was to be located in Wichita, Kansas and would serve the Western 2/3's of the State of Kansas. The initial organization has been guided by the Heart of America Squadron, Missouri Wing.

The Jayhawk Squadron was known for several years as the "most dynamic" Unit of the Confederate Air Force.

In 1990 a CAF PT-23 was assigned to the Squadron for restoration and operation. The wing has completed a ground up museum quality restoration of a Fairchild PT-23 primary trainer.

Later a CAF Cessna UC- 78 twin engine airplane was also assigned for restoration and operation. The UC- 78 was manufactured in Wichita, Kansas. It was used for multi-engine training and utility transport during the war years.

In 2004 the CAF Jayhawk Wing was successful in building a large first class aircraft hangar just West of the runway at Westport Airport. Over $100,000.00 was raised to build the hangar and took several years of fund raising and hard work by many, many volunteers. Word's cannot express the thankfulness of the Wing to so many contributors from the private sector and business community .Without there generous contributions the hangar could not have happened! !

The hangar is our new home and has opened the doors of opportunity .Besides flying our two great airplanes at Airshows and civic events we operate one of the best PX operations in the CAF organization. We have sponsored such events as Boogie Woogie Wichita, Salute To Valor and Airshows. We have done the impossible from time to time! ! !

Our Volunteers are the backbone of the Wing and are the greatest. Every time a need is requested a gaggle of enthusiastic volunteers do there thing and make it happen.

History is a good yard stick to measure progress and the CAF Jayhawk Wings has a rich history and a very bright future. The Wing continues to grow both in membership and in reputation. There are many exciting challenges ahead but with God's good grace and a lot of hard work there isn't anything we can't accomplish.